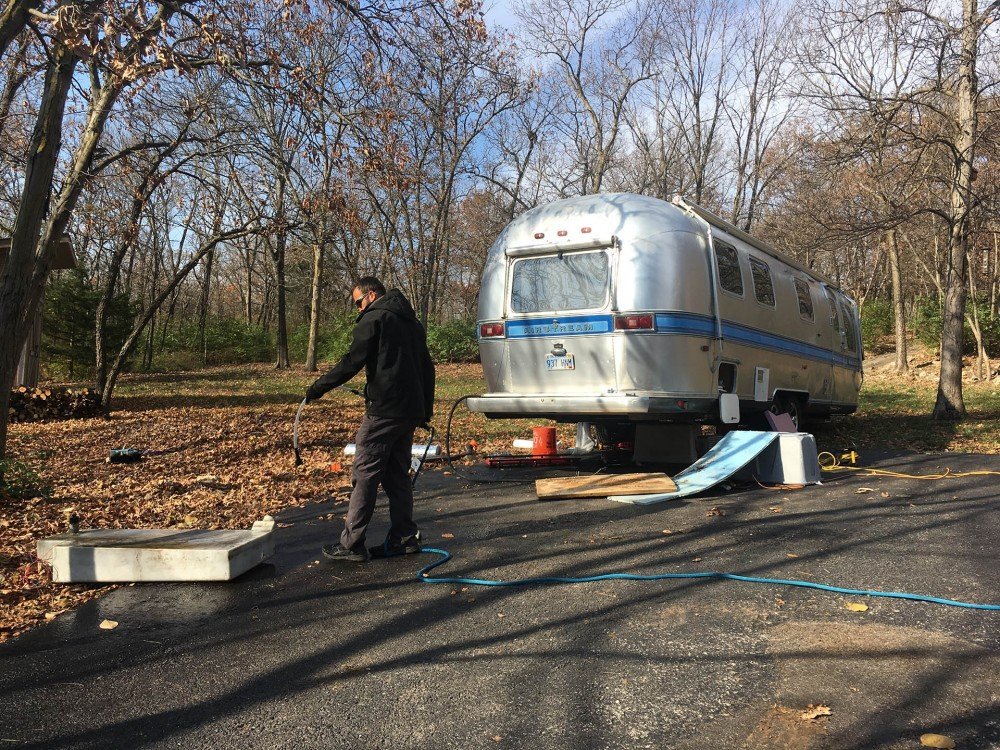 Near the end of Summer 2018, we noticed a slight drip coming from underneath the airstream. Nothing major, but enough to cause a little distress given how much time we still had booked for the rest of the year. By the time we reach Heber City, Utah in October, the leak had progressed to something more substantial.

Before we dig into the the repair process, let me explain our hunt for this leak in a bit more detail. In addition to the small drip, our shower started "backing up" - meaning if we ran the water at too high of a pressure and for too long, it wouldn't drain quickly enough and would start pooling up into our shower pan. At that point, the leak outside/underneath would speed up and we'd hear a "glug glug glug" noise from somewhere under the floor. Through trial and error we were able to make an initial theory - there was a leak in our shower trap, which was causing the leak when the water would reach a certain "height" in the trap/plumbing.

To test this theory, I opted to try to seal whatever leak may exist. Because the plumbing under the shower was not accessible, I added some various sealants directly into the inside of the drain pipe by hand, and after 24 hours of cure time tested it out. No joy - same problem! The next step was ordering a [relatively] cheap endoscopic camera from Amazon to hopefully make the leak-locating process easier.  I drilled a couple small holes in the wall near the base of the shower so I could sneak the camera in and see what was going on. Fearing the worst, I was pleasantly surprised to see that it was bone-dry under the shower floor/where the shower trap was located.

Okay... so the leak isn't in the shower drain, trap, or anywhere directly under the shower. The next step was cutting an access panel in an attempt to see if I could locate the leak from underneath the trailer. 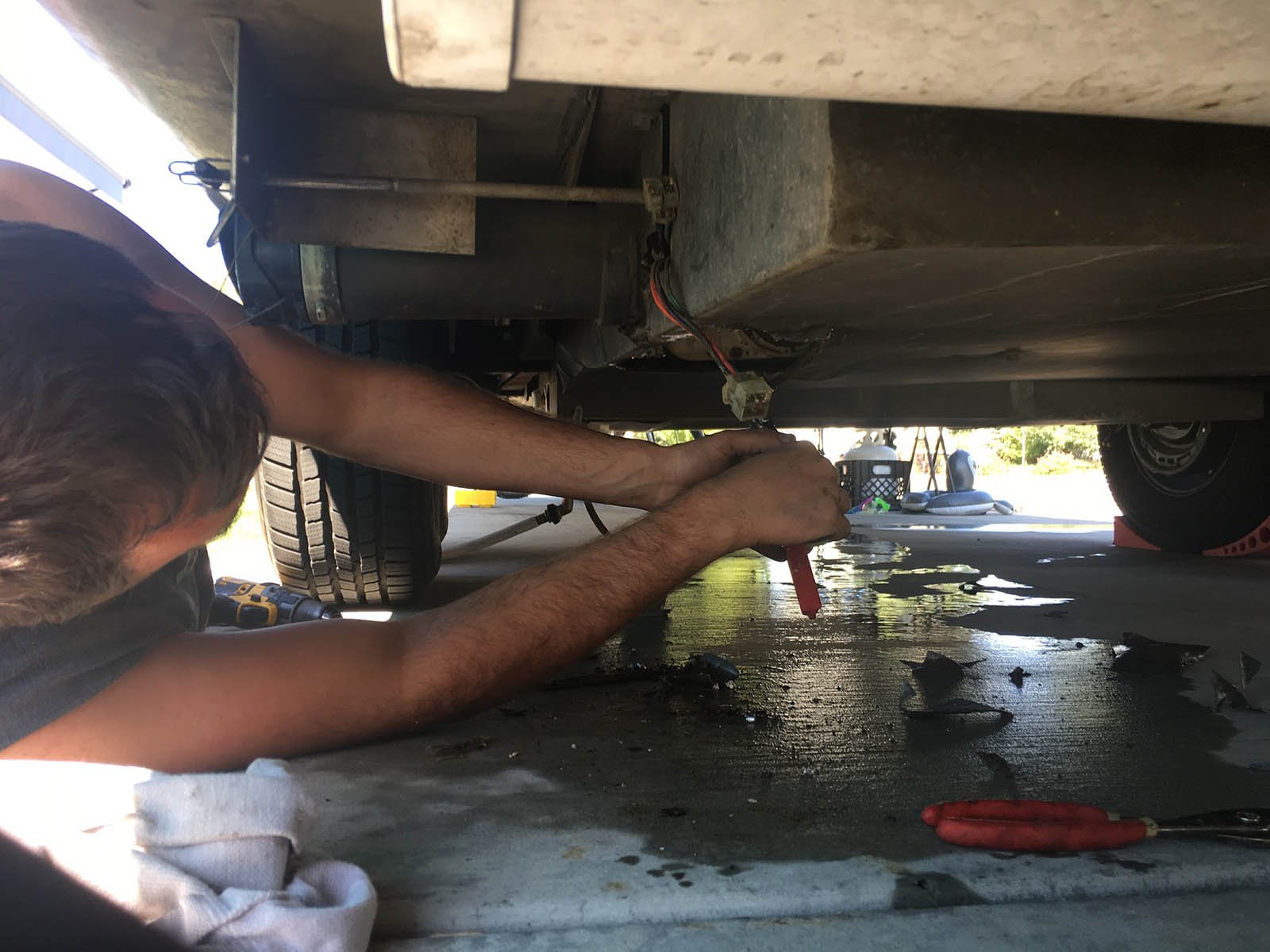 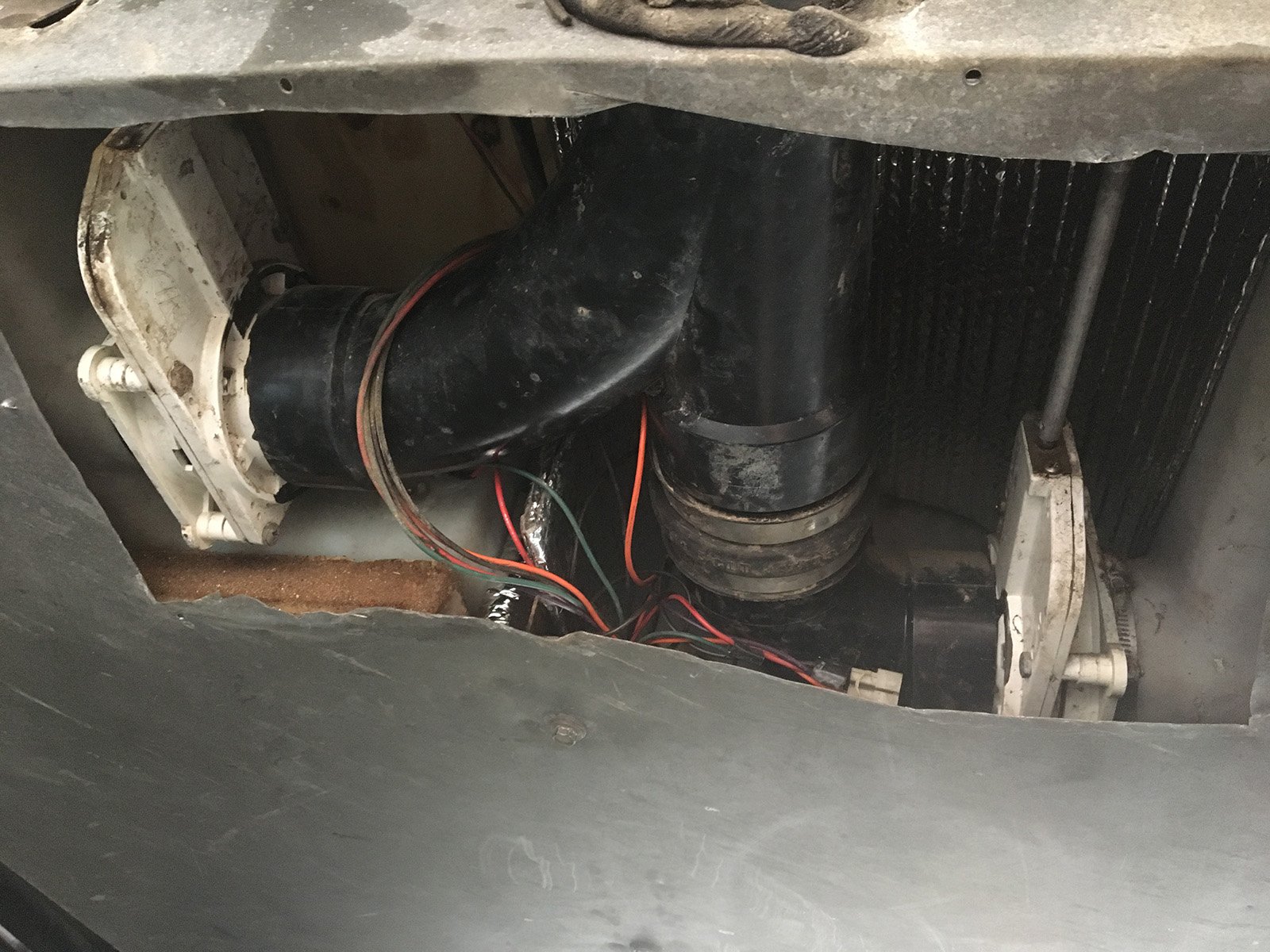 Immediately when cutting this panel, water came gushing out - it had apparently been pooling up and sitting for some time (not good). Luckily there is only rigid foam on the bottom of the tanks, so we didn't have any interior damage to worry about. I used the camera in every angle I could, everywhere I could, but could not find this leak! This was rapidly reaching the end of what I could diagnose/figure out from an RV park in Utah. We spent the rest of our time using the (super nice) shower facility conveniently across the road from our trailer.

Shortly after arriving home, we started the process of figuring out this out. The first thing I did was drop the shroud the holds up our gray and black tank (this is a metal "shelf" that the tanks sit on, and this sits lower than the belly pan of our airstream). 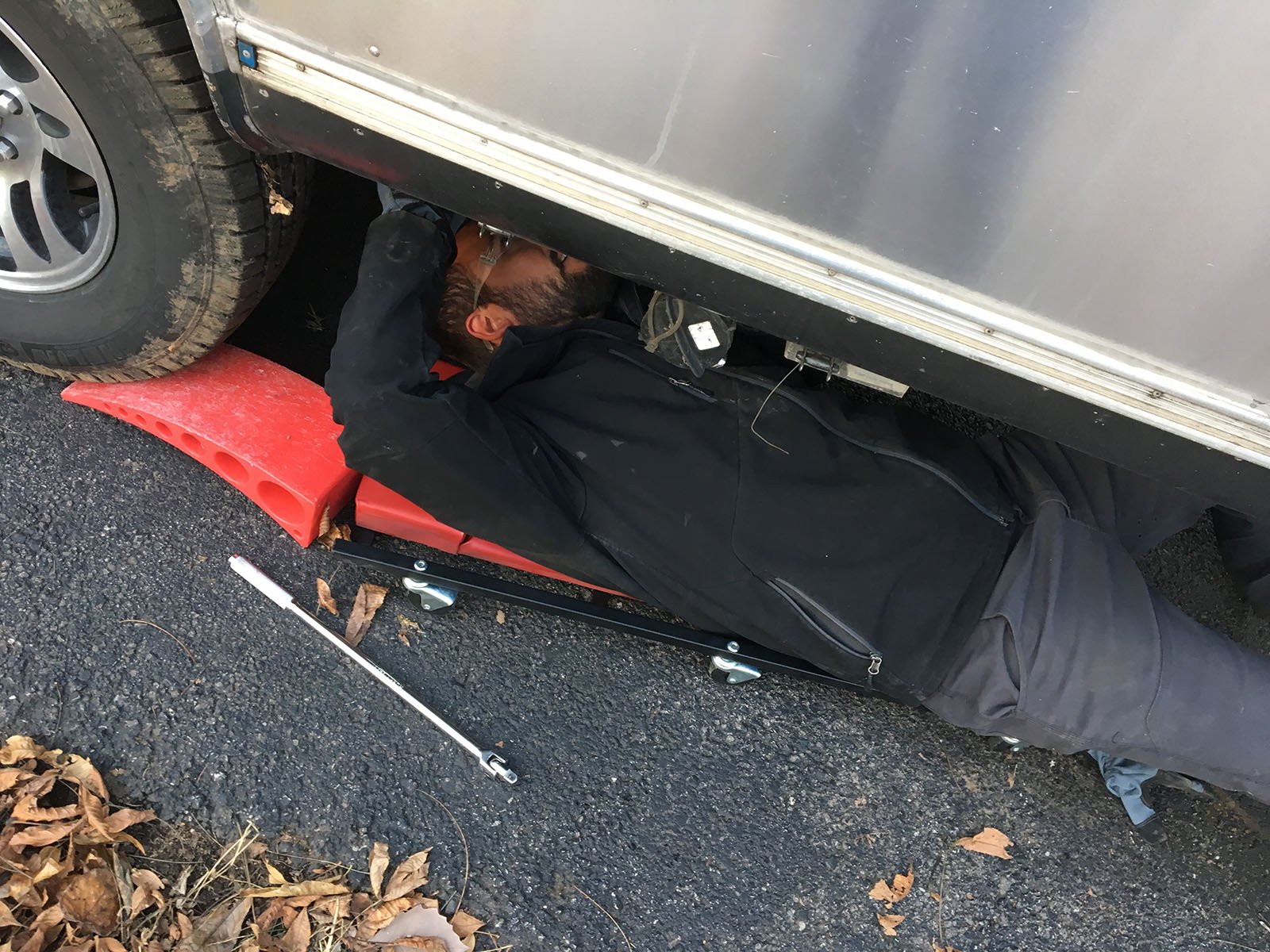 I used a floor jack with a piece of plywood to slowly and carefully lower the shroud; the tanks were able to stay suspended/held in place by their connections. I disconnected the gray tank from the outer drain assembly and it dropped free with minimal effort. The source of my leak became very obvious, very quickly:

Yep, that would definitely cause a leak.

I called around to a half dozen or so plastic fabricators in our area, and none were willing to take the job given the age and very specific nature of the issue. I attempted to locate and call a tank manufacturer out of California who made the tanks from this model/year and they no longer had the molds to make new tanks.

Finally after a bunch of googling I was able to determine that this was potentially something I could tackle myself (which is good, because apparently no one else wanted to haha). Because the tank is polyethylene, they make plastic welder kits that can repair cracks and holes in tanks such as this. I ordered a plastic welding kit from Amazon, and after watching a couple youtube videos decided to go for it. First, we decided to give the 30+ year old tank a really good cleaning. I say we because I had to take the picture of my better half doing this job. 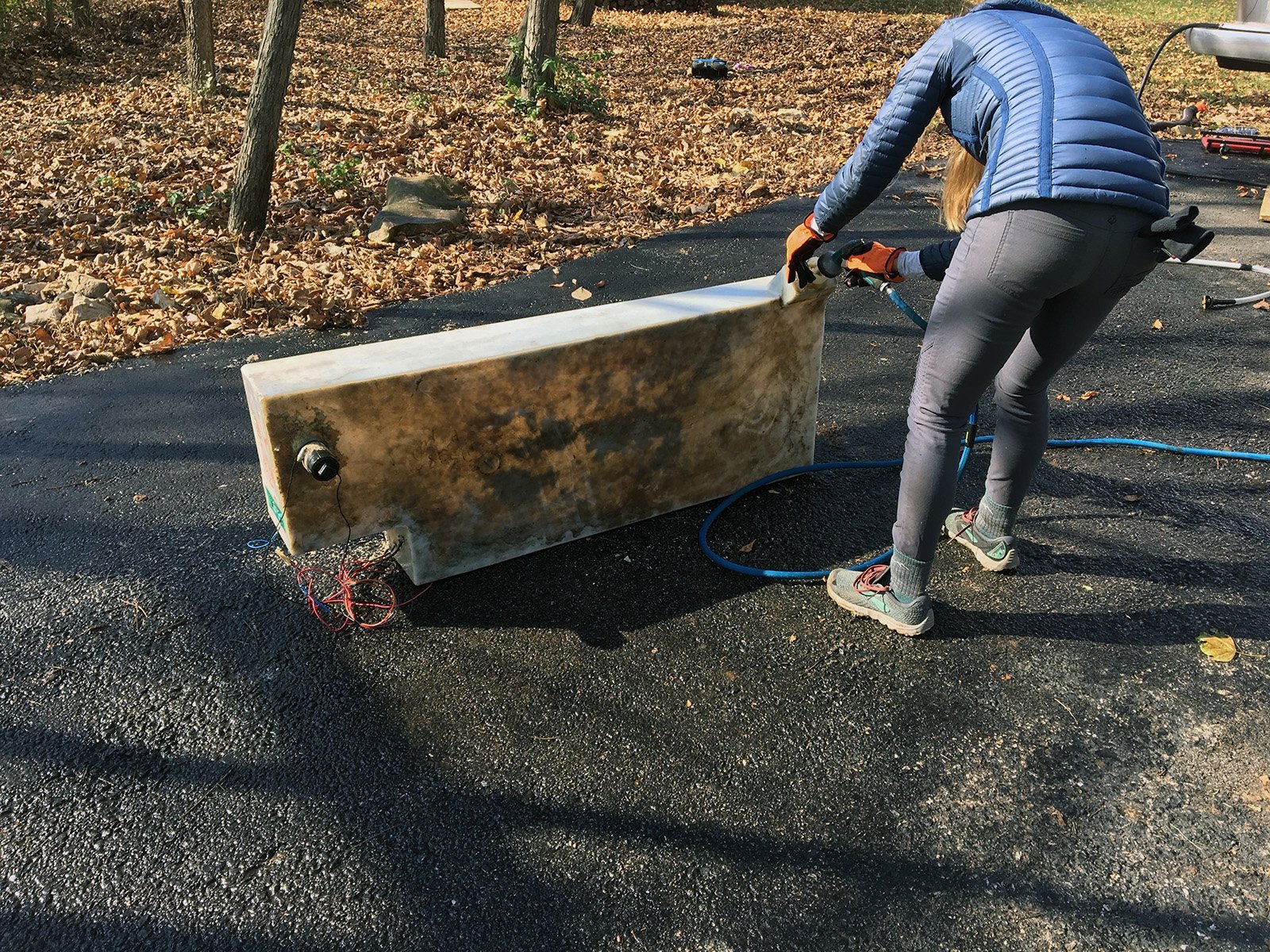 After drying, we started the welding (melting) process. It applied like hot glue, and was pretty simply to do. 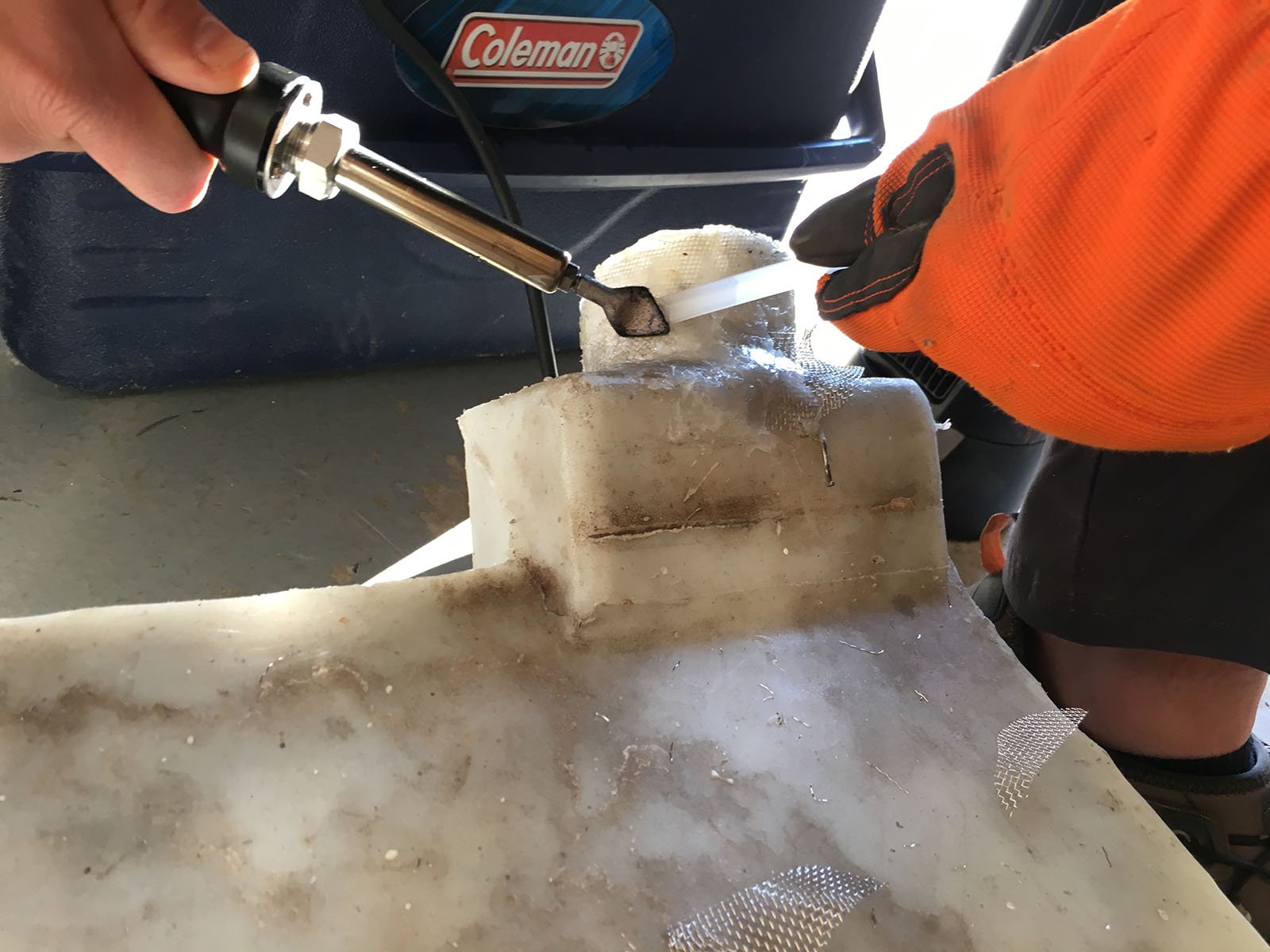 Not the prettiest weld, but she'll hold (hopefully). 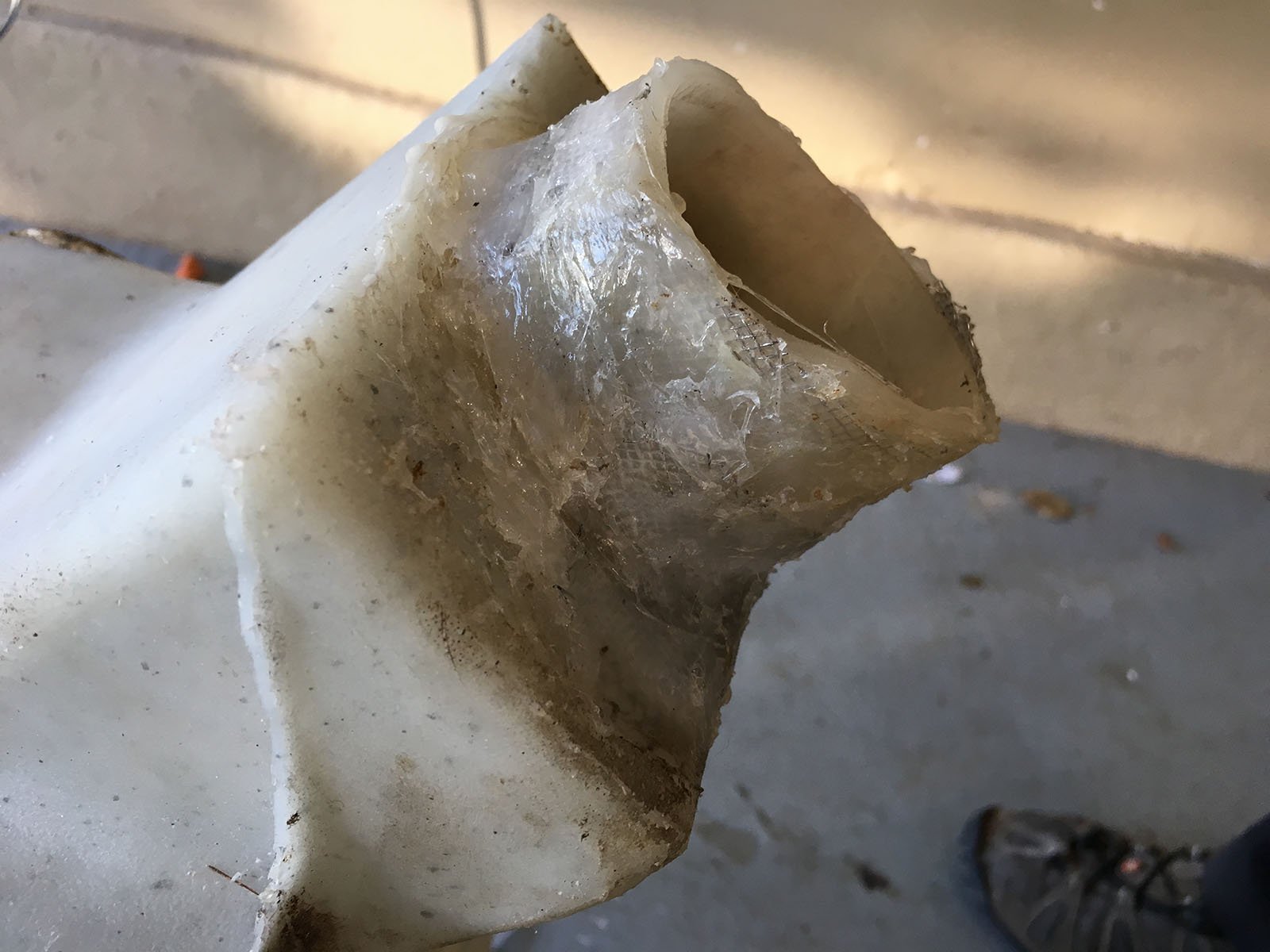 With a helping hand from my brother Terry, we got the tank back within the metal shroud, jacked it back up in place, and painstakingly get the friction/pressure fit of the tank to inside plumbing back together. Then it was putting the bolts back in and giving it a final test... which was successful, no leaks!

Now we can move on to the "fun" updates.